VD may be over but who’s to stop us from continuing showing and sharing the love? N o  o n e :D So here is a quick roundup of the brands’ love messages that won me over this year.

Victoria’s Secret takes Valentine’s Day VERY seriously – not surprisingly. After all, it is the most romantic day of the year and so the perfect occasion for dialling up sexiness in the form of, er, sexy underwear.

Leading up to D Day, the brand made a real effort of owning 14th February by calling it something else, and most importantly something that would strongly resonate with its target audiences (male and female). In Victoria’s Secret world, VD is now known as Bombshells’ Day – named after one of its most popular brands. The words Valentine’s Day were banned from its communication strategy, nowhere to be seen in the posts. Bombshells’ Day as a communication platform is not only a key differentiator but also has the bonus of longevity – it can be reused year after year.

The brand kicked off a month-long rallying call on its social networks around its #bombshellsday hashtag, inviting all women out there to celebrate themselves first and foremost. Its social networks were peppered with feel-good and ego-boosting CTA’s interspersed with lingerie-clad model shots throughout the 4-week period. A YouTube video was created, primarily as a sales tool intended for a male audience. It is the brand’s cheeky one liners on Instagram however that resonated best with me.

The tone was right on brand –  playful, flirty and sexy. Below is a chronological snapshot of my favourite posts from kick off to D Day: 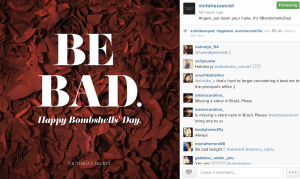 Unlike Victoria’s Secret, Lululemon only had one thing to say – a bold and funny statement that struck a chord with all yoga lovers out there like me.

Don’t we all love freebies? A simple human truth that works every time. The Coffee Bean & Tea Leaf company knows this too well as it lured its fans and their special loved ones into its shops with its 2 for 1 promotional offer – as seen on Vine. Perhaps not as original, yet as effective. 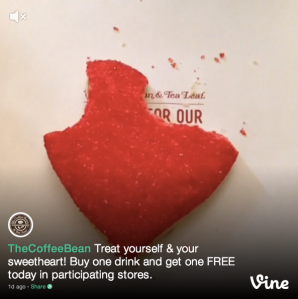 Lastly, the award for “going above and beyond a simple tweet” goes to Necco for its Tweethearts web app and accompanying catchy tune – the app lets you create and order a pack of personalised sweetheart candies from a tweet – see mine below:

Nooow how about you?
Did any of your favourite brands strike a (positive) chord with you on social this VD?
Don’t be shy and just hit reply to share and spread more love :)