Last July, I wrote a blogpost about what makes or breaks branded content. One of my learnings and tips for successful content marketing read:

Be Brave: have a point of view. This will help reinforce your USP.

Since then, I have been exposed to many brands on a daily basis. And until only recently, I can’t honestly remember any of them coming to my attention for taking a stance on a worthy cause. Yet it is what we as consumers have come to expect – quoting the 2013 WARC Trends report:

“Brands need to show consumers they are trying to help solve the issues society faces. (…) That may mean a greater focus on corporate ethics and authenticity.”

In other words, brands need to make a positive difference to society, over and above selling products and services. This means identifying the social mission at their heart, showing true commitment to it and letting it be known.

The fact is that brands that go the extra mile like Patagonia, the outdoor apparel company, or female antiperspirant brand Secret, remain a minority still. Patagonia is not afraid of taking a political stance to help protect the environment. Secret famously fought for the rights of female athletes to be allowed to compete in this year’s winter olympic ski jumping games.

Then, this month, something magic happens. Hopefully, a sign that brand activism is slowly but surely becoming the way one does business.

4 brands unexpectedly grabbed my attention for taking a stand very publicly. They stood up for a cause worth fighting for. For what they believed was right and true to their mission. And by doing so, they have won me over. Or rather, they have won my gratitude as a consumer. As a result, I am more likely to buy from them and spread the word, with competitors fast disappearing in the back of my mind.

Google with its Sochi Olympics-themed doodle in support of gay rights was the first of such brands to come to my attention. 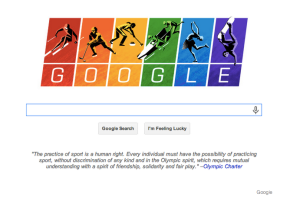 Scottish Craft Beer company BrewDog also stood up for the Russian gay community by simply mocking Putin’s anti-gay laws and Putin himself. They created a special edition beer “not for gays” called “Hello, my name is Vladimir” – hilarious and useful; you can buy it online here. This only shows what a powerful weapon humour can be against oppressors.

On a smaller-scale yet in the same spirit, hats off also to Russian snowboarder and Olympic Athlete Alexey Sobolev, who defied his country’s government by flaunting his Pussy Riot-themed board during the competition.

Coca Cola celebrated a multicultural America in one of its Super Bowl ads this year. Simply, beautifully and very openly with more than 100 million viewers exposed to it. A bold, commendable move from a great, iconic American brand. We want more of these please.

And as I am wrapping up this blogpost, I came across one other brand that publicly supports diversity and inclusion. This time, a brand closer to home.

ANZ, one of the top 4 Australian banks, has been one of the major sponsors of the Sydney Gay and Lesbian Mardi Gras since 2006. This year it became Principal Partner and to celebrate this, it turned its ATM’s into GAYTM’s on 23rd February:

Some may see seasonal brand activism (around major events only) as opportunistic and a mere PR exercise only, bringing into question the authenticity of the brand’s commitment to the cause – as opposed to being deeply integrated into their business model and company’s DNA (Raven+Lily and ecoATM are both great examples of this).

Regardless, seasonal or not, if it helps the community, it is a good thing. It may also be the start of bigger things to come or the manifestation of a long-term yet punctual commitment (ref. ANZ example).

I thought of ending this post on a high… At first. Ending it on a low however is just as effective.

Subway grabbed my attention for the wrong reasons this month.

First, for its lousy Super Bowl ad – why spend millions of $$ on a made-for-TV ad at the Super Bowl?

And most importantly, shame on them for using the same chemical in their “freshly-made” sandwiches as the one used in shoe soles and yoga mats – yes, you read right.

The company has since withdrawn the chemical following a petition from 50,000 consumers. In my view, it should withdraw itself from the market altogether for making us eat plastic in the first place.

This simply reminds us of the enormous power we also have as consumers to make positive changes and punish (banish?) brands behaving badly.

Now… Any brands close to your consumer heart, that stand for something big and you want to give a shout out to? Or any brands you love to hate for the right reasons?

Let us know by hitting reply!